The Source of Art 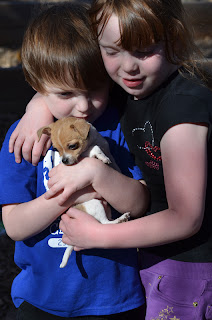 Guest post by my daughter,  written May, 2012, with a picture of her children

The Source of Art

Twelve years ago today on May 15, 2000 is when I first laid eyes on my future husband, Matt. We worked in the same company, but I worked in the Austin office and he worked in the London office. He had flown into Austin to train us on the company’s proprietary software. Other than Matt, I was the first one into the office that morning. We worked in a large, open-plan room with low-rise cubicles and the room was always dark because the programmers preferred for the lights to be off. He was sitting at a desk off in the corner working at a computer, his face lit up by the computer monitor in the dark room.
Two days later, I had a massive crush on him and two months later we were dating. And one year later we were married.
So May 15 is an auspicious day for me. It’s a day of love and beginnings. So, today is the official day that I begin writing as a career — truly begin. No more waltzing with fear and hiding from fate. I start work today.
And I’ve been conducting a postmortem in my head of all my past failed attempts. I can create brilliant small vignettes — little snippets of a story that read like poetry and carry deep meaning. But whenever I try to write an entire book, it reads, at best, like an 8th-grader’s attempt at fiction. The kernel of the story holds promise, but the surrounding prose drags it down into the realm of the novice, lacking clever timing and meaningful metaphor.
And why is this? My conclusion is that the failed attempts at an entire book have never come from my soul. Now, we can sit here and debate whether we even have souls or not, but the truth of the matter is, every artist creates from a personal and sacred spot deep inside of them. And when someone creates from this place of true emotion and lived experience, the resulting art has a life and an impact. Its beauty resonates outside of and separate from the artist.
And I think, when I’m forcing myself to just write through a story, that I’m not writing from that sacred spot. And the resulting story leaves the reader without an experience.
So, I’ll try to write from that sacred place. The story may be jumbled and it may meander untethered, but at least it will be true. And it certainly can’t be any worse than my past attempts.
Posted by Paul Howard Clark at 6:00 AM